Gallatin Sunnyside Volunteer Fire Department
News Headlines
Advertise on our site!
Wed. Jul 8th 2015
ADVERTISE YOUR BUSINESS ON OUR WEBSITE FOR A SMALL MONTHLY FEEYou can promote your business on our site for as little as $25 a month What you will get with your $25/month Tax Deductible Donation: -You...
Read more »
Call History
Residential Garage Fire - Bunola River Road - Forward Twp.

Shortly after Midnight, 154 Units were alerted for a Garage on fire next to a residence as well as a Natural Gas Metering Station in the area of Bunola River Road and Rainbow Run Road in Forward Township. Washington Captain 63 was passing the scene and notified dispatch that this would be a working fire with multiple exposures. 154 Engine and Rescue arrived and stretched an 1-3/4" Attack line and began extinguishing the fire. Crews worked quickly to bring the fire under control within minutes of arrival and prevented any extension into the adjacent garage and metering station. Crews remained onscene for a few hours to perform overhaul and to assist the Allegheny County Fire Marshal. 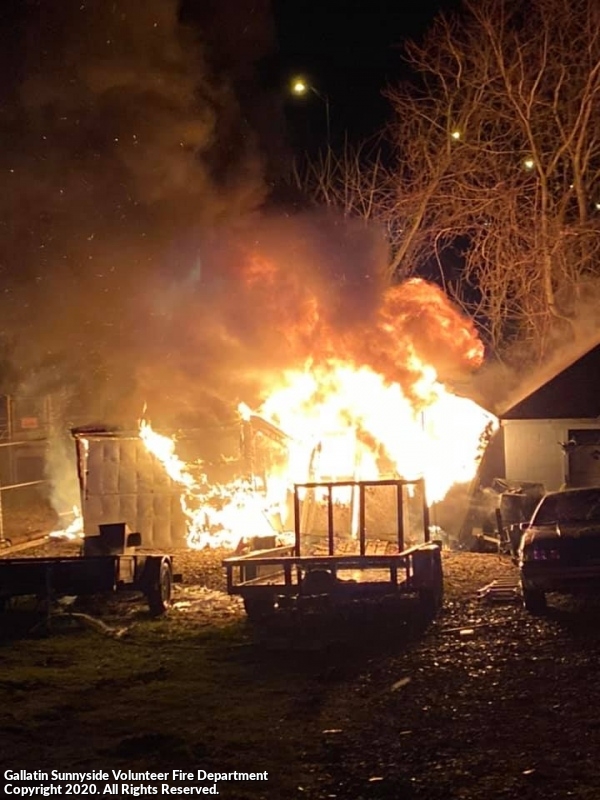 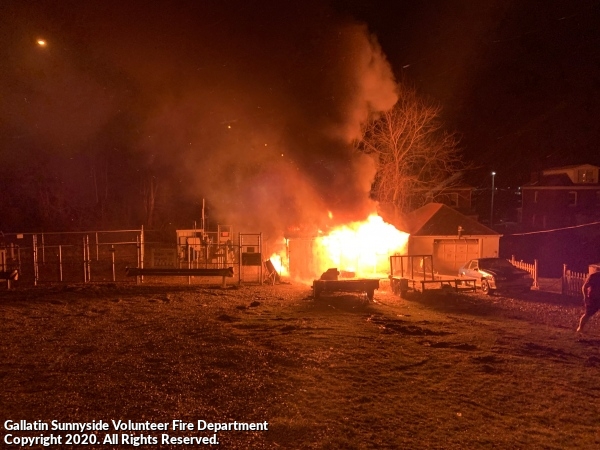 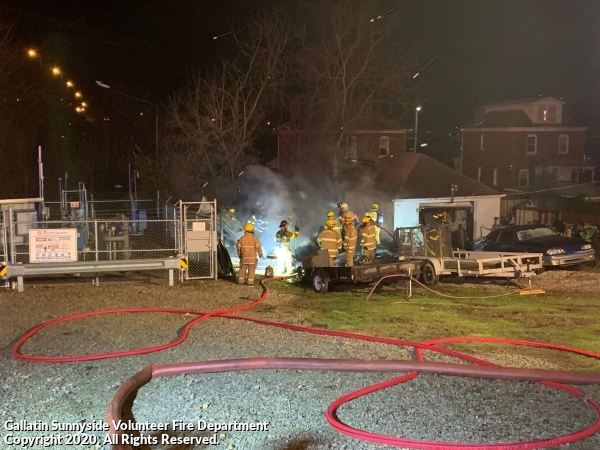 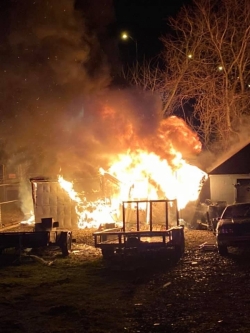 Shortly after Midnight, 154 Units were alerted for a Garage on fire next to a residence as well as a Natural Gas Metering Station in the area of Bunola River Road and Rainbow Run Road in Forward Township. Washington Captain 63 was passing the scene and notified dispatch that this would be a working fire with multiple exposures. 154 Engine and Rescue arrived and stretched an 1-3/4" Attack line and began extinguishing the fire. Crews worked quickly to bring the fire under control within minut...

Units were alerted for a Commercial Building fire at the Elizabeth Radiator Shop on Hayden Blvd in Forward Twp. Units from 139 arrived and reported a working fire and requested a 2nd alarm as well as tankers. 154 Rescue-Engine was requested to establish a water supply and feed the attack engine. 154 Rescue performed a reverse lay and laid 1000' of 5" LDH from the alpha side of the building to the hydrant. Crews worked to extinguish the fire in the basement, 1st floor and roof area.... 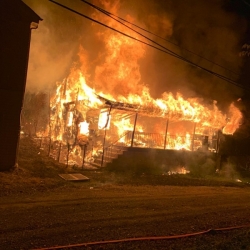 At 05:17, units were alerted for a residential fire in the 600 Block of Munger Lane. 155 Capt arrived and reported a working fire. 154 Engine arrived within minutes of initial dispatch confirmed a 100% involved single story structure on fire and began extinguishing the exposure building before completing extinguishment of the main fire building. Units were on scene for about 5 hours before returning to service. The fire is currently under investigation by the Allegheny Co Fire Marshall.Mung... 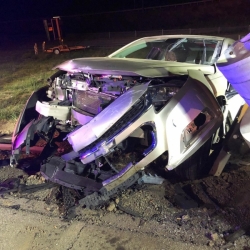 Units were alerted at 21:38 to the intersection of Hayden Blvd (SR-51) Offramp and Rainbow Run Road (SR-136) for a single vehicle accident with injuries. 154 rescue went in route shortly after and arrived on scene with 154 Chief confirming patient confinement. The Engine and Attack arrived right behind the rescue and extrication was completed to assist EMS gaining better access to the elderly patient. Rainbow Run Road Command: 154 ChiefRainbow Run Road Operations: 154 As... 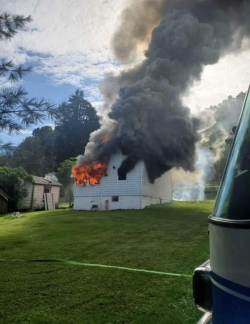 154 Units were alerted at 16:17 hours for a station fill request for 140 Station 2 (Blythedale) while they operated on a Working Structure Fire in their First Due. 154 Engine, Rescue and Attack quickly went enroute with 8 Volunteers and upon arrival at Station 140-2, 154 Engine was special requested to the scene for mask men and manpower. The engine crew arrived at the fire and was given the task of ventilating the roof of the structure. The roof crew opened up for interior attack crew... 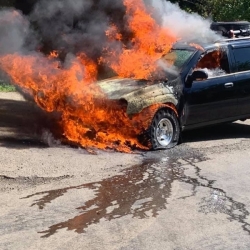 154 Engine was alerted at 12:15 for a possible vehicle fire at the intersection of Bunola River Road and Elkhorn Road. 139 Chief arrived onscene and confirmed the working fire. 154 Engine was the first arriving engine and quickly initiated an attack on the fire resulting in a quick knock down. 139 Engine arrived next and assisted with hot spots and overhaul of the vehicle. All units cleared shortly before 14:00 with no injuries reported. Units on scene: 15... 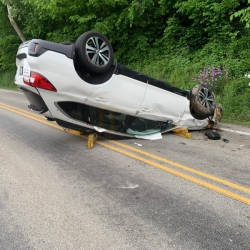 Just before 1100 hours, the 154 house was alerted for an expanded traffic collision on Rainbow Run Road in the 154 first due. 154 Rescue quickly went in route and arrived with 7 members to find a single vehicle rolled over with the patient self extricated with the help of passerby’s. The Rescue immediately stabilized the vehicle and assisted EMS with patient care. Units assisting us on scene were 155 and Westmoreland 31. 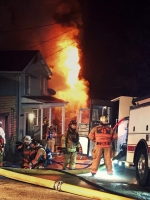 On Tuesday 1/15/19, 154 Units were alerted for a residential structure fire initially reported in the area of Locust Ave in the first due shortly after 17:30. 154 Captain 2 (B.Newman) immediately confirmed a working fire and The Engine, Rescue, and Attack went enroute soon after followed by a request for a 2nd alarm assignment. The Engine arrived with a 2-1/2 story wood frame fully involved with extension to an exposure building on the Bravo Side. A 3” blitz attack line and an 1-3/4&r... 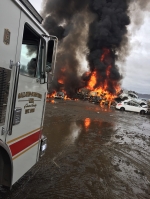 Shortly before 10am this morning, 154 units were alerted for a possible Commercial Building Fire on the Forward Twp side of the Monongahela Bridge. 154 Lieutenant (B.Newman) notified Fire Dispatch that this incident would be in Monongahela, Washington County at the Monongahela Iron and Metal scrap yard and requested Monongahela, Station 62 be notified. 154 Engine, Rescue and Attack already enroute to the initial incident responded with 12 personnel to assist Monongahela Fire Department with exti... 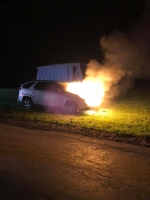 At 8:31 this Sunday evening units were alerted for a 2 vehicle crash with injuries at the intersection of Rainbow Run Road and State Route 51 in Forward Twp. 154 Rescue and Engine arrived, confirmed the initial dispatch and began patient care along with assistance from Engine 155. While onscene, units were notified of a vehicle fire on Torrence Road in Forward Twp, which resulted in 154 Engine and 155 Engine being reassigned to this incident. 154 Engine arrived, stretched an 1-3/4&rdqu... 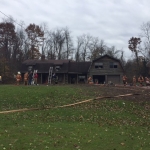 Shorty after 10:00 hours, your volunteers were alerted for the possible residential structure fire. 154 Rescue, Engine, and Attack were all on the road immediately after when reports came in that it was a working fire. The fire was marked under control around 13:30 hours and units went back in service after cleanup. Total 154 Personnel Onscene: 10 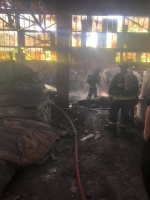 At 10:27 this morning, fire crews were alerted to Lock 3 Coal Company on Delberts Drive for a commercial building fire with a passerby reporting thick black smoke coming from the roof. 154 Assistant 1 arrived and reported a single story commercial building with smoke showing. Upon further investigation, it was discovered that there was a large pile of debris and tires on fire inside of the building. Crews worked for approximately 15 minutes to bring the fire under control and perform overha... 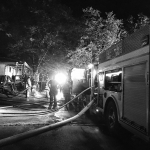 The Rescue and Engine were alerted at 01:30 this morning for a reported Residential Structure Fire in the 51 Estates section of Forward Twp. Crews arrived onscene and reported a working fire in an unoccupied dwelling. Firefighters from 154 Rescue, Engine and 139 Engine stretched 1-3/4” attack lines and a 3” BlitzFire line and proceeded with extinguishment. Crews remained onscene for several hours assisting the Allegheny County Fire Marshal while they investigated. Units Onscene:...

Shortly after 7 PM this evening Gallatin-Sunnyside VFD was alerted for 3 individuals in the Monongahela River in distress. 154 units quickly responded and notified Washington Station 62 Monongahela Fire Department, Westmoreland Station 31 Rostraver Township Vfd Webster, and Elizabeth Boro Station 139 for assistance. Upon arrival, 2 of the 3 victims had made it close to shore where rescue crews from 154 aided them out of the water and to the waiting EMS personnel. 1 victim remained in t...

Shortly before 02:00, volunteers from 154 and 155 responded to a single vehicle crash into a pole this morning on Roberts Hollow Road. The patient was self-extricated before crews got on scene and the patient was treated by EMS. Crews remained on scene to assist the tow operator.

Shortly before 07:00 today, crews were alerted for a single vehicle crash into the median on Hayden Blvd near Foxwood Drive. Police arrived and confirmed there were 2 patients confined with minor injuries. Crews from 154 Rescue, 139 Rescue, and 155 Engine arrived and began working on extricating the patients. Fire units remained onscene to assist the tow operator before returning to service.

On April 16, 2018, at 09:36, 154 Units along with automatic aid from Forward Township Volunteer Fire Department #155 and Westmoreland Rescue 31-Webster VFD, for a single motor vehicle crash with rollover and unknown entrapment on RiverHill Road close to the intersection of Bunola River Road. Units arrived to find 1 vehicle on its roof with all occupants self-extricated prior to Emergency Units arrival and denying injury. Crews remained on-scene to assist the tow operator before returning to...

The Rescue, Attack, and SOV are just returning from a brush fire in Elizabeth Twp. While crews were working this fire, we were alerted to assist Fallowfield Fire Department in Washington County with a large Barn and brush fire. Due to the Gallatin-Sunnyside units being tied up assisting Elizabeth Township, our standby company Rostraver Township Vfd Websterhandled the Washington County assist for us. Thank you to Monongahela Fire Department for taking the place of Webster and cover...

While our fire units were still onscene of the fire in Carroll Township, Washington County, 154 Engine along with 155, 139, 142 and Westmoreland Rescue 31 were alerted for a single vehicle crash into a tree with reported entrapment. Upon arrival of fire crews, it was confirmed that a single vehicle was into a tree with confinement, and a pole and wires were down in the area. Onscene crews worked swiftly to extricate the patient and handed them off to the medics for evaluation and care. 154 ... 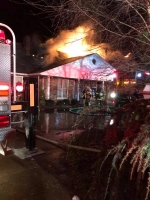 FollowTweet
Copyright © 2006-2021. YourFirstDue Inc. All Rights Reserved. Designated trademarks and brands are the property of their respective owners. Content on this web site is supplied by Gallatin Sunnyside Volunteer Fire Department. YourFirstDue Inc. cannot be held responsible or liable for any content, text, pictures, or any other media found on this web site. Maintained by the members and staff of Gallatin Sunnyside Volunteer Fire Department.
Management Login
Powered by